Monday is coming again and I want to continue the story of my journey in the west couast of Gusung Island. Last week’s story stopped at the part where I enjoyed Liang Tarussu Beach. But there’s something I forgot last week, I haven’t uploaded this photo. 😀

Although the sun is very hot, but it was very cool under the tunnel. I really enjoyed being in it while listening to the rush of the waves that swept the sands.

I loved to stay longer at Liang Tarsusu beach, but the owner of the ship reminded me to immediately go before the sea water become recede. If the tide is low, the boat cannot sail, and we will be stuck on the beach for a long time. Ended up with a heavy heart I left liang tarussu beach and went to Janeyya beach.

After sailing for 20 minutes to the north, we arrived at the beach. I thought, there was no difference between Janeyya beach and Malemalea Beach. Only a white sandy beach with many palm trees behind. Nothing special. Fortunatelly the boat owner knew my disappointment, then he took me to see 2 caves around the beach.

We walked for 30 minutes through the red soil where there are a lot of rocks to get the cave. I was exhausted and painstakingly followed the boat owner to keep up. He walked fastly, and I get amazed with his bare feet that walked on the sharp rocks without felt pain.

The first cave we encountered was a vertical-mouthed cave. There’s water in the middle. I thought that it’s connected with the sea. And it reminded me to a film titled Sanctum, a film about sea cave in Papua new Guinea.

From this cave we moved to the second cave. we had to walk again for 30 minutes, through the sharp rocky soil, bush, and a lot of mosquitoes. I felt so tired, but I was curious. 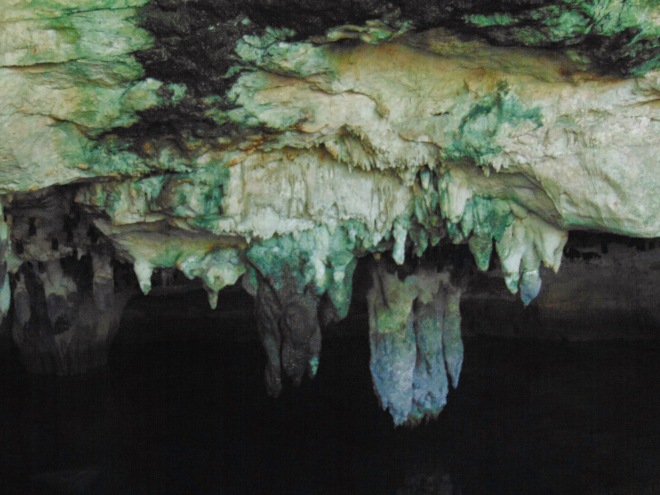 Finally we got it. Such as the first cave, there’s water at the ground of this cave, but for me this is more beautiful because there’s stalactites and stalagmites. 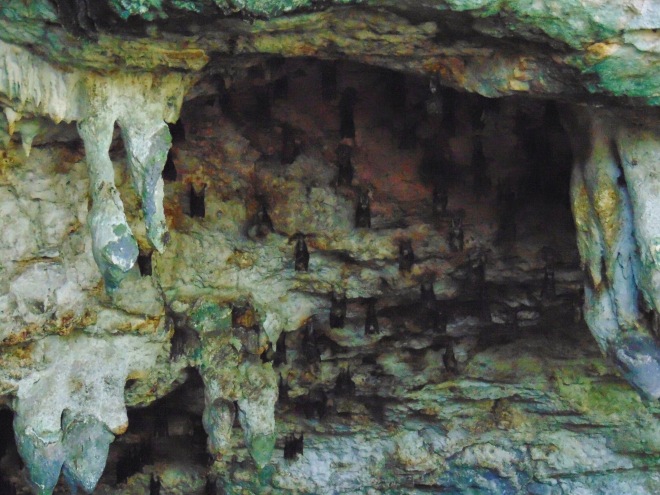 There are many bats that live and hanging on the walls of this cave. they fly and sang when I made noise by shouting and clapping.

I didn’t want to miss this moment, so I asked the owner of the boat to take a photo of me.

When we returned to the beach, the sea has receded. we weren’t able to continue the journey to the north to reach the last beach, Ballojaha. The boat owner tried hard to push the boat to the sea, and then we sailed to the south.

The boat owner offered me to get the last beach through the land and I agreed. Then he took me to his home in fishing village on the east coast of the Gusung Island. From his home, we went to the beach by motorcyle.

Sailing to the fishing village seemed so long because we had to sail around the island and the waves was high. I didn’t know exactly how long us against waves. I was dizzy, so I tried to fall asleep. When I woke up, I was glad that we had arrived.

Many fishponds around the east coast of Gusung Island.

When I was in the village I didn’t took photos because too many people were looking at me with a strange.

Whereas during a way to the beach, I was busy balancing myself on a motorcycle that is driven on uphill and down and winding streets. But I felt that I had to take a panorama of blue sea, although with the fear of falling down.

30 minutes later, we arrived at the Ballojaha Beach. It’s a long coastline, white sandy, with the forest and rocks as the background.

We stopped to take a picture after we out of the woods. At the northern end of the island I saw a pig out from the woods onto the beach. But it immediately go when we tried to be close.

At the north end of the west coast of gusung island, there is an odd hole. When the ocean tide, the water will be sucked into the hole and form a vortex. But when the sea recedes, it emits cold water that flows into the sea. 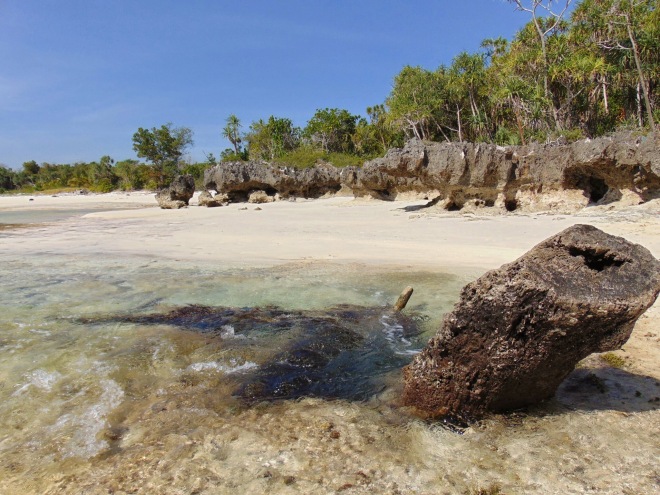 The sea was receding when I was there. The water that is coming out of the hole made a gurgling sound. Here I tried to take another picture with different angle.

This pattern is created by water that flowing to the sea. 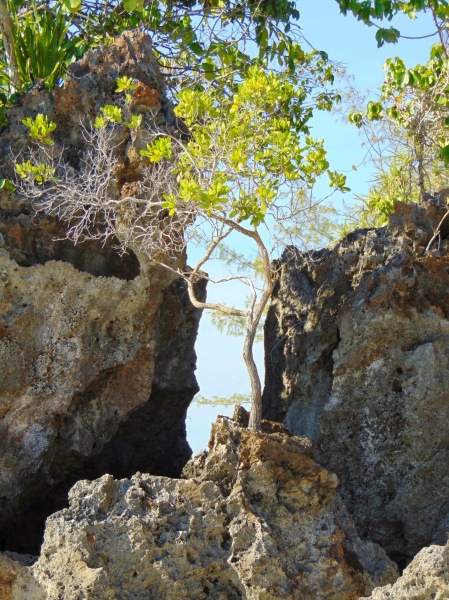 Again, I got amazed, how trees can live on a rock?

There are also a lot of holes and rock debris such as at Liang Kareta Beach.

when I looked around the sea, I felt peace. Always love the blue sky.

Day was getting late in the afternoon and the moon began to appear.

We returned to the village, and saw a fisherman who was tying up his boat.

From the fishing village on the east coast of the Gusung island, I went back to the pier in Padang Village by boat, then take the minibus to Kota Benteng, the capital of the Selayar islands.

Been a few months since my adventures in gusung island. Every inchs of its beauty is still there in the memory. It’s a memorable trip indeed.

So happy that in can write and share it as the part of learning and challenging my self to write in english. Thank you so much for reading, and have a wonderful week. 🙂