It has been so long since I promised Sreejith to write about Mount Krakatoa. And…because the promise is something that must be fulfilled, so now let me open again my dictionary and write in english. 😀

I have visited Mt. Krakatoa for three times, and it’s awesome as always. But I won’t go there anymore because Mt. Krakatoa is a nature reserve that shouldn’t be used as tourist attractions. I hope the government change the status of Mt. Krakatoa become natural park, or national park, maybe. So to be honest, at this point I feel guilty for having violated the rules, and climbed it.

But a couple motnths ago, I met a new friend from Lampung, who is a photographer and love traveling. He showed me a photo of Mt. Krakatoa when it was erupting. Then the photos changed my mind, that it’s ok to enjoy the beauty of Mt. Krakatoa, but just don’t get into the area of Krakatoa Nature Reserve.

My friend said that to get the scenery of Mt. Krakatoa when it was erupting, we can stay at the island around Krakatoa. On February 2014, when it’s erupting, he stayed at the southern of Sebesi Island and took the photo with tele lens. To be known, Sebesi Island is located 15 kilometers to the notrhern from Mt. Krakatoa.

Mt. Krakatoa as the most active volcano in the world is located in Sunda strait. Mt. Krakatoa that we can see today, is actually the son of Mt. Krakatoa that has erupted violently in 1883. How powerful the eruptions can be read on many websites, including Wikipedia.

Eruption that occurred on 26-27 August 1883 led to the heat clouds and tsunamis that killed more than 36.000 souls. The power of explosive is estimated at 30,000 times of atomic bomb that was detonated in Hiroshima and Nagasaki at the end of World War II. The eruption caused global climate change. The world was dark for two and a half days due to volcanic ash that covered the atmosphere. The sun was dim shining until next year after the eruption. Scattering of dust was visible in the sky of Norway and New York.

Half of the mount was lost after the eruption, and leaving three islands and caldera in the middle. Then in 1927, appeared a volcano in the middle of the caldera. In 1927 the height of volcano is 9 meters above sea level, and continues to grow bigger until now. In 2005 the recorded height is 300 meters high above sea level. The growth of the mountain is caused by materials that released each eruption, such as sands and rocks. Every year it became higher about 20 feet and wider about 40 feet.

Here are some photos that I have taken from Krakatoa.

December 2013. Early morning at 3 am, we departed from Sebesi island to Krakatoa by boat. It about 5 am when we were almost arrived at Krakatoa.

May 2014. The sun is begining to spread the light. The photo was taken in the northern coast of Mount Krakatoa, where the boat landed.

May 2014. Mostly trees that are living in Mount Krakatoa is spruce.

May 2014. Between the spruce trees, there are also many this flowers. I dont know the name. 😀

August 2013. The sun is rising. View from the top of Krakatoa.

May 2014. Found this dried tree while walked down. 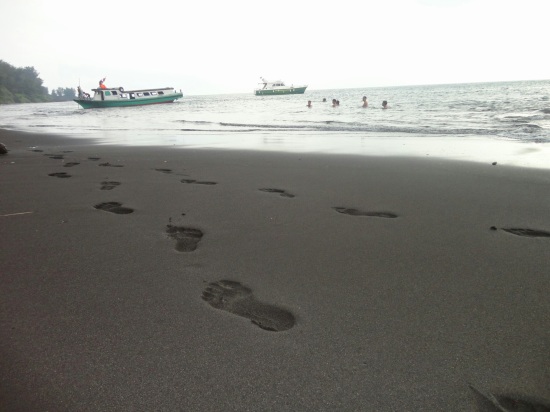 August 2013. End up leaving the mountain.

I gladly link up this post to Jo’s monday walk, a comfort home to read many walker stories.